skip to main | skip to sidebar

Nothing by Robin Friedman 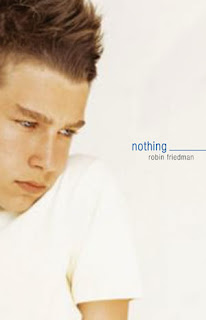 Parker Rabinowitz isn’t your typical Jewish teen.
Well, he’s a smart rich kid from the Jersey ’burbs, on his way to med school, overscheduled, overloaded, and living in a pressure-cooker, like everyone else.
But Parker looks different, feels different, and, lately, his behavior has been very different.

(Review)
Wow, just wow. I've never read a book like this. Parker (not gonna spell that out) has an eating disorder. He is bulimic and has very low self-esteem. The book is told by Parker and his little sister Danielle. Switching on and off. Each chapter is a new day in a count down. Ex: Chapter 1 is entitled "88 days before" and it goes down each chapter. Which is interesting cause you must wonder...Days before what? And by the end this is revealed...Yeaya.


Okay no 'Yeaya' it's quite a sad book. But this book is really good. It's an interesting look in Jewish families and the expectations that come with it. And you get the best of both words reading this book. You get the struggle of the person with the disorder and with Danielle being able to write, you get to see how someone on the outside is handling there brothers problem.


Also there is a quote I would like to point out. "Sometimes trees can look healthy on the outside, but actually be dying inside. These trees fall unexpectedly during a storm." I just love this metaphor for Parker.

Although Parker is kinda annoying. And I honestly don't see how someone as hot as he is would have such low self esteem. He also gets thinner and thinner and the only thing people say about it is "Did you lose weight?" No that believable. Also perhaps if Parker was over weight his story would be more believable.

Cover: Parker is known as a god when it comes to his looks. The boy on the cover although cute is not a god.

Age Group: Teens 13 and up for sure. This book has very little swearing and other then some heavy make-outs, it pretty timid. But the fact that Parker has an eating disorder he does do things that in itself is very...Heavy material. So that's it. Remember don't copy what you read in books, cause if you do, you may actually be a jack-ass.

One Foot in the Grave

Laughingcorpse
I'm 16 year old teen reader. I spend way to much time online, but has been resently cut down ever since I got a social life. I'll be reviewing all things Dark. And even somethings Light. SO LET HAVE FUN WITH IT.